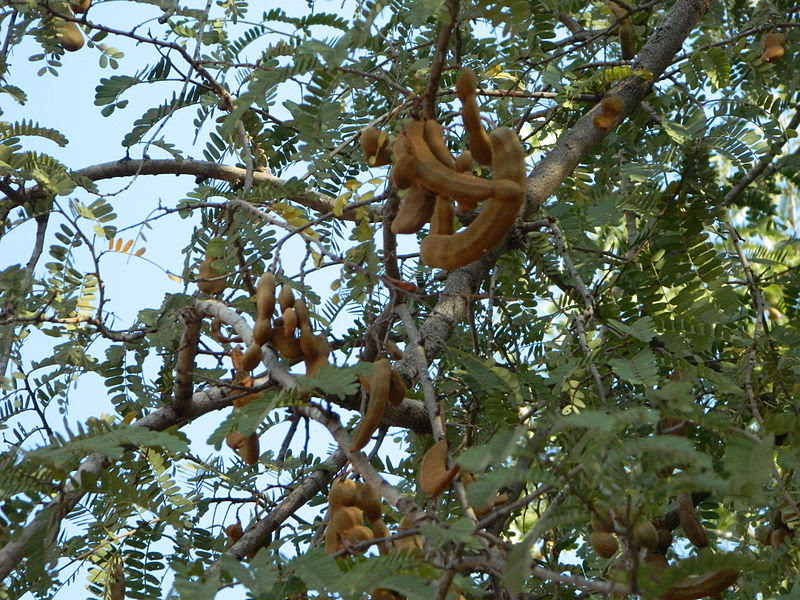 " See, see, Imli!" pointed Roma hesitantly to the tamarind tree. The other girl looked up from her heap of stones which she had collected to aim at the tamarinds hanging from the branches far beyond their reach. The ones nearest to the ground were already gone. It was one of the many trees that dotted the perimeter of the school's playground. Those tamarinds have always enticed the children, peeking through the swaying pinnate leaves. Raw green ones, to half ripe ones with their yellowing insides or the brown hollowed ripe ones with the sweet and tangy pulp. No amount of warnings during the morning assembly could ever deter the children. The mere vision of it was enough to send them into salivating raptures. It was this power of tamarinds that made Roma cry out,

" See, see, imli!"
" You wantah ?" the other girl made signs like she was talking to someone mute.
" Yes..." Roma managed nodding shyly.

This was the first time Roma was attempting a conversation in her new school. She hated it here. She hated it when the sun rose with the sounds of water sprinkled on the courtyard of the ground floor apartment. Someone swept with the broom making an unnerving scratchy sound on the wet earth. But she liked to watch the white kolam being designed out of dots and criss-crossing lines and curves. She often stood fascinated at her window  watching the maid downstairs make elaborate ones with complicated twists and turns of the white powder.

" Malli poo, malli poo!" cried the flower seller every morning carrying a basket of spirally heaped fragrant jasmine flowers. Roma had seen these strands adorn every girl or woman's hair here. Well! She liked those and she liked the kolam. That was about all she liked in this new place. She hated going to school and she hated sitting in her class. She always had this impulse to run back home to her mother when she saw the green PTC 47B approaching the bus stand. She listened hard to understand what her classmates were speaking. Roma pretended not to hear their questions and when she could no longer avoid them, she answered in monosyllables. They spoke only in an English that sounded strange and Tamil. No Hindi. She was frustrated for she could speak only in Hindi and Assamese. Where she came from, these were the only languages spoken in school and every where around her. It didn't help that her curious classmates asked," Are you from China? Is Assam in China?"  Didn't they ever see a map of India? She felt alienated. With schools invariably shut down half the year in Assam, she realised she was at the bottom of the class in her new school. The bandhs, the class boycotts which they eagerly looked forward to then, had only made matters worse. She was shocked to hear her father say, " You'll have to attend Remedial  classes after school till your final exams. Your teacher suggested this."
" I am not a dumb student!"
" No, you are not. But you have missed out on a lot. Here the students have almost completed their syllabus."
" I will not go for Remedial classes! I will not stay in that school more than I have to! I will not sit with the dull students, I will not..." she choked her eyes brimming with tears. She had always been near the top of her class. What was this new place doing to her?

Roma was bewildered, sad and lonely. She longed for the open clean air of Nazira. The beautiful little colony with the British bungalows, the bamboo grove, the river that flowed by the Club with the soft flowering reed grass in clusters. She longed to rush out with her friends in the evening to play; she loved the thrill of going for rehearsals for the functions that kept springing up every now and then. Why the other day, they were on stage, lustily belting out the " Do Re Mi..." that Borthakur uncle had translated into Assamese. Roma was given the high pitched "Dha Ni Ni..." in a segment of the song. What fun!

She now lay on her bed looking out of the window of their two bedroom flat holding up the maths notebook in her hands. From the corner of the eye, she saw the clock ticking away, the hands approaching the dreaded hour of 7.30. Her time to take bath before going to school.She suddenly developed stomach cramps.She could feel  a hollowness in her chest and her stomach churning and tying up in knots.

" Ma, my stomach is feeling weird!"
"Weird? Where? Show me" said her mother placing her ironed uniform on the bed.
" It's paining everywhere."
Her mother looked at her thoughtfully.
"Drink some water, you should be okay."
"I can't go to school today, Ma."
" But you have a maths test, don't you?"
Roma turned her face towards the wall. Silent tears seeped out of the corner of her eyes and rolled over the bridge of her nose, creeping into her ears.
" I can't go to school. I don't want to go to school. I hate it here. I don't like the school....I have no friends....I have no friends...I don't understand what they say..." she sobbed rubbing her eyes with the back of her hands. Her mother looked at her and then at the doorway where her father stood with a towel over his shoulders and half lather cheeks, holding a shaving brush in his hand.
"Get her ready. I'll drop her at school today and have a word with the teacher."


Few weeks later, Roma sat in her after school public speaking class. She was comfortable here. All the students, like her, were not familiar with English as a spoken language. She was not afraid of making mistakes here. In fact her instructors encouraged them to make the mistakes!They recorded their speech and made them listen to the replays over headphones.She enjoyed these sessions. She felt herself loosening up gradually. Her class teacher was happy with her progress. In her final exams, she was back, not at the top but near the top of her class. The other day, after her little talk in the house assembly, which her speaking instructor insisted on, the Shivaji house captain had asked her to join the sub-junior inter house speech competition! Roma's face shone with excitement.
" You think I can do it?"
" You'll never know till you have tried, Roma" smiled her captain " Let me know when you are ready so we can have a few practices."


Few years later, Roma eased her bicycle down the steps of their ground floor flat's  verandah, careful not to disturb the beautiful white kolam  that gleamed in the morning sun against the clean wet ground .
" Romba azhaga irkuh, amma" she beamed at their maid who was gathering the broom, the bucket and the kolam powder tin.
Roma straddled her blue Hero bicycle, bought with her scholarship money, when paathi, Jyoti's grandmother called out,
" Roma, inda poo catch panna! Un venile potako!" Roma caught the jasmine strand dropped from the second floor, a ritual before she left for school. Deftly lifting a strand just above her braid, she inserted the flowers leaving it dangling on either sides of  it.
" Nandri, paathi! Bye!"
Just then, Tripathi aunty came rushing to her fourth floor balcony.
" Roma, come over in the evening. I'll make you some papdi chaat and plus a new maid is coming."
Roma grinned waving at both the women as she pushed her bicycle forward. Tripathi aunty, just a few months old in Madras, had trouble with the language. She was communicating mostly in sign language similar to the Sunday afternoon sign News on Doordarshan. Feeling the breeze caressing her face, Roma turned left to reach the main road, bustling with the morning school and office traffic.

Your words keep me going :)

Its Just Me by Ilakshee is licensed under a Creative Commons Attribution-ShareAlike 3.0 Unported License.
Based on a work at http:/www.bloggers.com.